Expect plenty about N. Ireland identity issues in 2013, as Derry/Londonderry is the new UK City of Culture this year. William Crawley from my neck of the woods has made an interesting programme for Radio 4 on the rise of a specifically Northern Irish identity (vs solely British or solely Irish) in the 2011 census. Northern Ireland: Who Are We Now? Radio 4, William Crawley. The census and recent Life and Times surveys have thrown up this interesting group, mainly among younger people, who have bound themselves into Northern Ireland as a place and who come equally from Protestant and Catholic backgrounds. (The census also suggests that while the traditional ‘blocks’ are shrinking, they still dominate the landscape – so be wary of wishing them away.) But this new non-aligned block may now be seen to hold the balance of power. 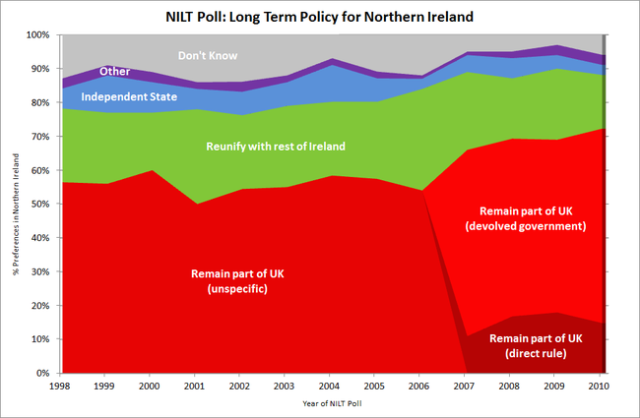 Northern Ireland’s Life and Times Survey, 2010 – how NI people see the region’s future. NI’s long term future is still overwhelmingly seen by its inhabitants as being in the UK. It seems the rise of SF voting within the Catholic community is about asserting community rights, not a growth in support for secession from the UK. Jeremy Hardy, take note ...

The good, stabilising news is that this non-aligned Northern Irish cohort seems to want to move on based on the constitutional status quo, founded on the Good Friday Agreement settlement of 1998. They accept Northern Ireland as a political reality and are comfortable with it. Peaceful life in Northern Ireland depends on Irish unity being both theoretically possible (to keep Irish Nationalists happy) and highly improbable (to reassure British Unionists Armageddon is not at hand) – which I suppose I would say as a N. Ireland Brit myself, but it’s true anyway. The rise of the new Northern Irish – and the 2011 census’s comfortably low figure for those feeling only the non-British version of Irish identity (26 per cent) – seems to keep that state of affairs for the foreseeable future. So this particular UK border (our only land border, remember) may now depend as much on the passivity of the apolitical of both communities as on the strength of political British unionism. Worth noting too though that it is the “non-aligned” nature of this kind of Northern Irish person that is new, not the Northern Irish identity itself. The latter has existed for decades, but is more usually held in tandem with one of the two over-arching national identities (British for most, Irish for some) as a strong regional component.

The new figures now set the background within which the coming ethnic politics of Northern Ireland will be played out. The Troubles of 1969-1998 and most other things about the place can’t really be understood without reference to local geo-demographics. This context is frequently left out of the news reports purporting to explain events to people outside the province. I have little surprise so many people are baffled by what they hear and conclude that the place is inhabited by irrational dunderheads. There are some, but the situation is usually not quite so nonsensical as it seems.

An aside … The recent fuss over flags at Belfast City Hall is largely because the council decision broke the unspoken understanding that big, sensitive decisions like this are only made these days with the consent of both blocks. I’m personally a supporter of the (cross-community) Alliance party but I think they made a big mistake on this one in voting for such a controversial change without cross-community consensus. The other unmentioned factor in much of the reporting is the dual significance of Belfast City Hall as a building. If it were just the building for the council of the city, that would be one thing; but it’s more complicated than that: (1) the ‘Belfast’ city council area does not cover the whole city or anywhere near it, due to the creation in former decades of other councils which cover parts of the city, particularly Castlereagh, in which much of East Belfast falls. There are many Belfast people outside the rather odd boundaries of the Belfast city council area – and they regard the City Hall as the centre of their city; (2) then there are  people from the outlying suburbs of Belfast – the wider ‘Belfast metropolitan area’ – who are also part of the Belfast world and also regard the City Hall as the iconic centre of their city, even if they also have some detachment too. Both of these uncounted populations have strong Protestant / British / unionist majorities.

To many Protestants, who don’t pay attention to the minutiae of council boundaries, it has come as a profound shock that this could happen to the union flag in what they still see (not actually inaccurately) as a city most of whose inhabitants feel proudly British. It’s also a city that withstood multiple bombings by Nazi Germany in 40s and Irish Republicanism in the 70s, 80s and 90s, in no small part to keep the union flag flying over it. The council decision has to be understood in this light.

The limiting of the flag flying is not in itself a bad idea but unfortunately, like welfare reform in Westminster, it is pushed by people whose motives make you question the whole policy (here, the virulently [and formerly violently] anti-British Sinn Fein – honest brokers they ain’t – unless we’re talking broken legs in back alleys). Aside – and rant – over.

But Northern Ireland also feels like a markedly different place in 2013 from the place I grew up in – and one big reason is the demographic shift. I grew up in a Northern Ireland in the 70s and 80s which was broadly two-thirds Protestant/British to one third Catholic/Irish. What has happened since is a subtle shift of numbers but which has had a radical effect on the relative balance between the communities. For two decades now it has been nearer parity than domination by one side. The change in politics with the Good Friday Agreement reflected that shift, effectively recognising the fairly even ethnic balance and requiring big decisions to be made on a cross-community basis.

Ideally, Northern Ireland would have been governed that way ab initio, but that degree of experimental inclusiveness was probably too much to expect when the region first got its local parliament in the 1920s, when ‘majority rule’ a la Westminster seemed in theory like a reasonable way of proceeding. The problem was, the political parties in Northern Ireland being tied to ethnic blocks, it left Catholics in a permanent minority, which could only have been changed by one or both communities abandoning the traditional ethnic block voting patterns. Despite the brief hopes raised by the rise of the Northern Ireland Labour Party, this was never likely to happen due to the cultural attachments and mutual distrust of the two communities. The Good Friday settlement has the virtue of recognising that the ethnic blocks are the main feature of Northern Irish political life and making sure that big decisions needs the consent of both blocks. Both sides now have a veto. It can be frustrating but there is no other way. 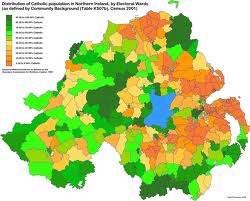 But the relative demographic strengths of the two communities really are at the heart of everything in NI, even if many of us in our more earnestly high-minded moments prefer to close our eyes to the brute reality of it. For example, though we will never know, it’s highly likely that the (Catholic) IRA wound down its terror campaign when it did, in the mid 1990s, partly because its leadership anticipated that demographic change would bring a Catholic majority in Northern Ireland within 10-20 years. There was a big leap in the Catholic percentage of the NI population between 1981 and 1991, from the mid 30s to 41.5 per cent. It all looked inevitable and Protestant doom-mongers joined some of the more optimistic Irish nationalists to proclaim so. The date of 2016, the 100th anniversary of the Easter Rising – then distant enough to give time for change to happen and near enough to feel within reach – was the year circled in Irish Republican diaries as the one by which they expected ‘their people’ to be in a majority. But 2001 brought a nasty shock for them. While growing, the Catholic percentage was not growing at the rate predicted – it had only grown to 43.8 per cent. But by the time the census data came through, the Republican Movement had long been locked into the Good Friday Agreement. 9/11 had also happened and changed the attitudes of rich backers in the US towards terrorism. There was no prospect of a return to violence in that climate. A miscalculation by them perhaps but a very happy outcome for everyone else.

It seems the Irish Catholic percentage has actually flat-lined over about 20 years now at about 42-43 per cent. The recent figures suggest actual decline in numbers. Because, while the total Catholic figure is now 45 per cent, it’s estimated around 2 per cent of this is from non-Irish recent arrivals from Eastern Europe, leaving the ‘Irish Catholic’ figure at around 43 per cent, lower than in 2001 and not much more than 1991. It remains to be seen how many of this overseas-born Catholic section of the population will stay longer term; and of these, whether more will adopt the “united Ireland” aspiration shared by most Ulster-born Catholics or favour more things staying with the current settlement (cross-community power-sharing inside the UK).

Irish Republicans still point to school roll numbers as showing the future: Catholic majorities now across all ages of school and indeed university students. This does suggest a Catholic majority one day. But that will take a long time to play out in the population overall and the extent it does depends too on emigration rates. Nothing is assured.

The percentage of Protestants has reduced from over 60 per cent when I was a lad in the 1970s and 1980s to now 48 per cent. And that is a shock to the Protestant system – even mine (and I don’t even live there any more). But if we’re going to remain as two cultures with different identities, I suspect settling into parity can only be good for stability. As long as we remember to make all big, contentious decisions on a cross-community basis.